So what is this all about then? You've come to the right place, methinks.

This entire site was a present, so I felt compelled to do something good with it. Unfortunately I'm a bit rubbish so I've filled it with whatever I could think of instead. There are lots of lists of things here, but they are by no means comprehensive of everything I like, have seen or heard, or own. I've just written about things that I thought I could actually say something reasonable coherent about. I've probably failed on that point, now that I think about it. Hopefully at some point, there will be something actually interesting on here, but I make no promises. I hope you are enjoying your time here anyway, and if you have any comments or suggestions please feel free to contact me or join the forum.

The Hoopiest Frood is aged somewhere between 18 and 30 and lives vaguely in the vicinity of Edinburgh with her loyal hippo, Mippo. Here they don't do much but spend their time together 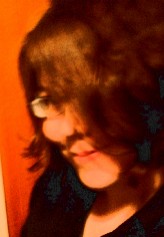 drinking endless cups of tea and coming up with new ways to occupy their day.

The Hoopiest Frood would also like to apologise for the 'emoness' of the photo of here provided, but it is purposefully vague in the hope that people won't be able to recognise her on the streets. Not that they'd want to, but you never know...

By the age of 16, The Hoopiest Frood had a few websites and groups scattered over the internet, most of which are abandoned now, and two minor religions following her. These started out as a couple of spoofs between friends but seemed to attract other people too. There are at least 100 members of these religions out there and you probably can still find them out there somewhere if you try hard enough.

The Hoopiest Frood likes stuff. Lots of stuff. Really, she does. Even more stuff than she even have put in this site. That's a lot of stuff. She's quite the geek, so she likes lots and lots of things, and so doesn't really know what to write about on here. This site will no doubt end up a big jumbled mess of what she likes, which is how she spends her ideal day anyway.

To be honest, The Hoopiest Frood is a pretty boring person really with a bit too much time on her hands. She occasionally gets up to strange and unusual antics and she will probably try to involve you in them somehow. And that's about it really.

A big thanks to everyone who has helped me with this. You're all superhelpful.