The premier purveyor of "Outsider Chic". 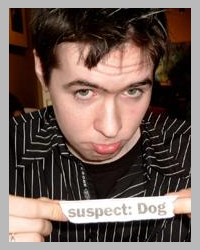 Kindie is an exceedingly cool person. Like one of Mr Kipling's cakes, but cool, and not a cake. That was a bad choice of simile. Anyway: Kindie, who shall henceforth be known as Kindie as I believe he prefers it to his proper name, plus it's a lovely word to say, is actually so cool he has spawned an entire movement known as "Outsider Chic". You've probably never heard of it, but only because it is so cool I think I've used the word "cool" too many times in this paragraph.

Anyway, Kindie enjoys the best things in life. I say "the best things" but I only mean the things I consider to be the best. This involves wearing a beret and trying to convince random people you are French, and spending hours cutting up newspapers and doing silly things with them fuelled by masses of coffee. So in my eyes, Kindie entirely rocks.

Mippo says: Kindie may look like a bit of a "joiner" to most people, but he's never been anything but nice to me."