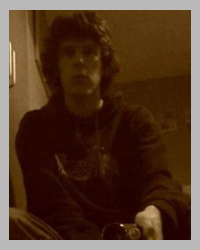 And now for Robbie, or Robert, or Roberto or Dr Robb PhD depending on the day. There is never a day better spent than a day spent watching Spaced with Robbie, eating toast and drinking enough tea to kill normal people. I wish I could somehow transmit his impression of Marsha to everyone in the world. "Hello, Brian..."

A fellow fighter in our campaign for good music (which doesn't actually exist, I've made it up this second), he has the best taste in music, and also comedy and pretty much everything to be honest. He's also an excellent skateboarder, though he would be modest and probably say otherwise. I'm quite jealous of this, as I can't even stand up on a still board without falling straight off it again.

Robbie is a lovely person to have to talk to and also gives some of the best hugs in the world. I have had some of the best discussions ever with him, and they're always really mind-expanding. In other words, Robbie "rules the school". Which school? The school of cool! He is destined to become famous, or rule the world. And if he does, remember, you saw him here first!

Mippo says: "He's not a real doctor you know, so don't let him touch you."