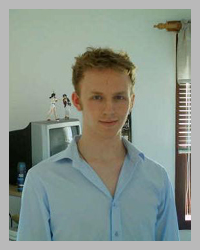 Stephen, Stephen, Stephen. What to say about Stephen? Stephen is my eternal buddy in geekdom. Together we shall take over the world one day, and we will be such awesome rulers that all of you will thank us for it. He may be the only other person in the world who understands my daily disappointment that superheroes aren't actually real. Stephen is in fact one of the few people tall enough to be Superman, and I find that and his superhuman strength combined with his Stan Lee style alliterative name slightly suspicious, to be honest... I'm so on to you! Maybe they are real after all...

Ah, Stephen is just awesome in general. Everyone should meet him, because he is supercool and really nice (and will one day be your benevolent superdictator for life). I'm so bad at writing these things, but he really is the loveliest guy ever when he's not slapping me upside the head for accidentally spoiling episodes of Justice League. I didn't mean to! Honest! And one day he will teach me to dance, which is indeed a mighty big task for him to brave - good job he's invulnerable to harm! So yeah, where was I? Oh yes, in conclusion, Stephen is an awesome awesome guy, but Batman is still way cooler than Superman. ;)

Mippo says: "He's pretty damn tall, but being a hippo I'm much stronger, plus he's a geek so I could totally take him in a fight. Bring it on!"