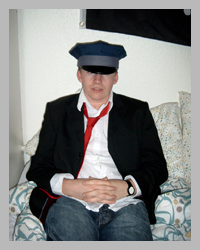 Nelly rules. He requested that I started off his page with that, and I might as well indulge him. Contrary to what the numbers at the end of his username would lead you to believe, Mr Nelly here isn't actually a spambot on the forum, even though his postcount may suggest otherwise.

So who is this mystery that calls himself Nelly? Why, when I tried to cheat and asked people to help me write this, could no one describe him? Is he an enigma wrapped in a puzzle shrouded inside a conundrum? The answer is, um, maybe.

One of my favourite things about Nelly is that he will soon officially be the law from Law. This amuses me endlessly because, well, I'm quite sad like that to be honest. He is a massive film buff, and constantly berates me for not having seen most of the films he has, which admittedly is damn near every film in existence. He also likes football and has an unhealthy relationship with the demon that is Champy. By god, I hate Champy.

But that's me just being mean, really, to see if he is reading this. And because I'm evil and I can. Honestly, Nelly is one of the loveliest guys out there who is good for hugs and gracefully puts up with large amounts of nonsense from me. Any girl would be very lucky to have him. And if he's to be believed, he goes on the internet in the bath, which really is the stuff of legends.

Mippo says: "#Nelly the elephant packed his trunk and said goodbye to the circus...# and while elephants aren't quite as good as hippos they're certainly better than humans."